Artists have to have faith that somewhere out there is the perfect destination for each of our paintings, and that we ourselves are seldom the best judges of that destination, even if we like to think we are.

The painting below, "Knot," has finally found its ideal home. 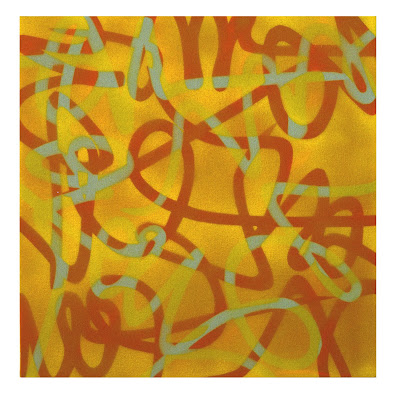 I made it in 2005, as part of a large group of paintings in a similar style, and right away, I knew it was one of the best of the series. I entered it in juried shows, sent it in response to calls for entries from galleries, used it as part of calls for curator applications, all rejected. My gallery at the time sent it to a hotel in New York for approval, but they turned it down and sent it back on their truck. I dropped it off with an art consultant who initially seemed hopeful, but they eventually sent it back too, having received no interest from their clients.

This went on for two years. I felt frustrated, knowing that it was a strong painting, but what else could I do? I had tried numerous times to get it out into the world. The work just seemed destined to sit forever in my storage bin, wrapped in plastic.

Finally last month I hooked up with an art consultant I hadn't worked with before, who asked me to bring by works in series. I grabbed "Knot" and three others from that series, figuring I had nothing to lose. The work had been rejected yet again, just a week before, for a juried show in Chicago.

As soon as the consultant saw this work, she was enthusiastic. (See, I KNEW it was good!) She had a friend who was starting up a biotech company and had decorated the offices in beige tones, so she felt the bright colors in "Knot" would add some dash. And sure enough, this company bought "Knot" and three others from the series.

What a perfect destination for this painting! The colors and the possibilities for the subject matter fit right in with the company's needs. It was a win-win-win situation. And if it had been accepted for that juried show, it wouldn't have been free and available for this client to look at and fall in love with.

So while so much of getting the work out there seems to involve fending off "NOs" in situations where we thought the work SHOULD be, we have to keep believing that there's an unseen benevolent hand, guiding the work to where it ultimately belongs.
Posted by Catherine Carter at 3:10 AM

Works that way for me as well. Seems like sometimes the best get left for last. At least if no one else thinks they will work for them, we get to keep the best.

Absolutely! And there's nothing more fun (and instructive) to look back over the "oldies but goodies" that remain in the studio, to see how your style has evolved, spark some ideas for new directions, etc.

I found this a very hopeful entry and hope my storage will empty itself out also, one of these days...

Marina, It seems to happen when you least expect it, or when you've stopped thinking about it and moved on to something else!