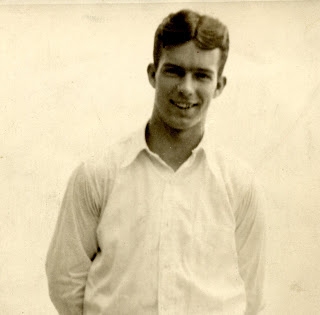 February 1 would have been my Grandpa’s birthday. Adelbert Orrin Parrott was born on February 1, 1910, and he died on December 1, 2006.

I was his only granddaughter. He loved me, and I loved him.

He lived an inspiring life. He came from a loving but poor family, and by his own diligence and intelligence, he became an optometrist.

He saved as much money as he could from his jobs in high school (I think the total was something like $100), but he didn’t have anywhere near enough for tuition at the college he dearly wanted to attend, the Massachusetts College of Optometry (now the New England College of Optometry). His father wanted to help, but his job as a custodian barely covered the family’s bills.

Grandpa wanted to go to that school so badly that he approached the admissions department and explained his financial situation. At first, they turned him down. He returned home, dejected, and then the phone rang. It was the college of optometry; they told him to bring in his $100 and he could start classes the next day. Something about his determination must have made them reconsider.

I have many wonderful memories of my time with my Grandpa, and they all add up to one overall memory of how he made me feel when we were together – special, loved and cared for – not because of anything I did, but just because I was Catherine.

Grandpa respected and encouraged my writing skills, and he always wanted me to have my own column in a newspaper. I thought it was appropriate that, on the day he died, the first story in my very own series, “In The Studio,” appeared in the New Bedford Standard-Times. I hope that made him happy – it was what he had wanted all along, for me to become a writer.

I miss him very much.
Posted by Catherine Carter at 2:48 PM