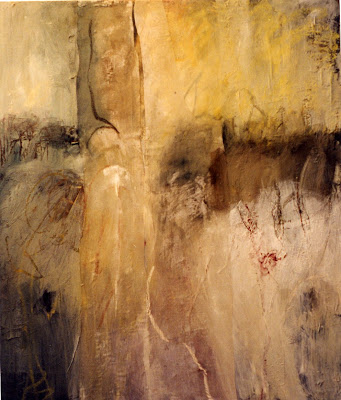 Much as we New Englanders love to complain about our lack of a real spring season, there's something about this time of year that I find very exciting. It isn't quite winter any more; even though it's cold and sometimes still snows, the snow melts away fast. It isn't quite spring yet, even though the buds are JUST about ready to pop. It's an in-between time, when we can feel that energy waiting in nature, waiting to spring, waiting to explode. It's like the runners at the starting line, waiting for the gun to go off.

That anticipation can be felt in every area of our lives at this time of year. During the winter, we have had the dark, quiet time to dream our dreams and lay our plans. Once the longer days and warmth return, it's time to put them into action, and there's a thrill in imagining how these experiences will finally play out, either soon, or by summer's end, or by year's end.

I find this time of year so stimulating that I've often interpreted it in various works of art over the years. Above is a painting I made, titled "Thaw," just before I finished graduate school in 1997. It was acrylic, oil stick and fabric collage on canvas, approximately 60" tall by 45" wide.

I loved this piece because even non-abstract-art fans admired it when it was displayed at my graduate school thesis exhibition (and later in a solo show at Facets Gallery in Fall River, Mass.). Even though there are no directly recognizable objects in it, many viewers told me they got that impression of melting snow making way for green, which was exactly what I had hoped to convey.
Posted by Catherine Carter at 4:50 PM