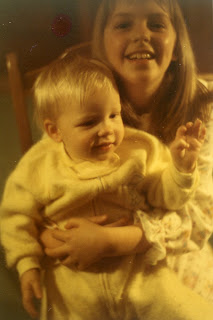 My little brother (and only sibling) Scott turns 39 today!

But even though he is now taller than me and sports a full beard, the picture above is how I will always think of him. He’s 7 years younger than I am, so he was definitely a “kid” brother when we were growing up. But I enjoyed reading to him at bedtime, and teaching him colors and numbers.

Scott was about 2 (not much older than he is in this picture) when my parents realized something wasn’t right with his development. He wasn’t speaking properly and seemed withdrawn, then he would suddenly start screaming at the top of his lungs for hours on end. At some point, autism was diagnosed, although that certainly wasn’t as common a term in the early 1970s as it is today. (Thank God, because the incidence then was much less frequent.)

I’ve read about the thimerosal theory surrounding autism, and it struck me how so many parents of autistic children remember them as “normal” babies who suddenly changed after receiving multiple vaccines. I wonder if this is what could have happened to my brother, since he seemed alert and aware as a baby. (Although maybe I’m applying this theory in hindsight, and he was indeed “born” this way. I was so young myself at the time, I just can't be sure.)

Almost 40 years later, my brother is easily agitated and hyper-focused on “little” things, like what kind of dressing is going on his salad. Environmental stimuli that we would ignore, or not even notice, just blows his mind. But in the occasional intervals when he is calm and feels safe, he is friendly and smiles and makes a happy remark about the weather or an upcoming holiday.

My memories of my brother are frozen around the time this photo was taken, before the word “autism” entered our lives. I remember him as my little blond companion, grinning and fun to be with.
Posted by Catherine Carter at 5:32 AM

Hi Catherine,
What a lovely photo and post....
My daughter Caitlin works in Developmental Medicine at Children's Hospital in Boston -- this spectrum of childhood diseases is her field of interest. I'm going to forward this to her -- she will love to read it.

It is certainly a worthy field to work in, Kate -- there are so many families in need of counseling and information, now much more so than in the past. Thank you for your response. Love, C

I hope your brother had a nice B'day. You are a darling sister anyone would love to have.