Memories of the King Philip Mill 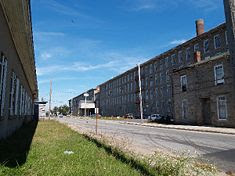 I took a trip to Fall River, Mass., today, and since I was in the neighborhood, I thought I would swing by the King Philip Mill where I had my studio from 1997 to 2001. I was renting a HUGE space for $169.38 a month (including utilities)! (Not that I can recommend the place; the landlords weren't exactly responsive, to say the least -- locks and windows left broken, etc.)

A sign outside the building today advertised their website, which didn't seem active when I checked on line just now, but a general Google search uncovered the following photo, taken inside the mill by Lewis Hine (a hero of mine) in 1916. This picture is from the records of the National Child Labor Committee, held by the Library of Congress' Prints and Photographs Division.

The young woman pictured was named Bertha Bonneau and she was 15 years old when this image was taken. She is working in the card room as a doffer. I wish, as I'm sure Mr. Hine did, that a 15-year-old was at the library studying, or out for an ice cream soda with her friends. But I'd be willing to bet that she and her family were thankful for, perhaps reliant on, the salary she was bringing in, however meager. 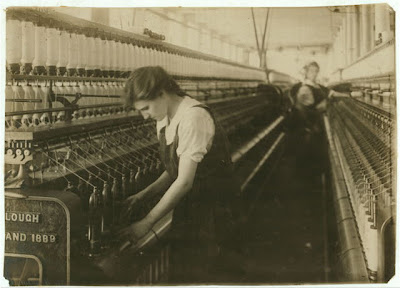 Posted by Catherine Carter at 4:04 PM

I am Joe Manning, an author and historian. I am conducting a nationally known project to track down the descendants of the child laborers photographed by Lewis Hine. I did some research on this photo this morning, and was able to find and talk to one of Bertha's daughters. Bertha was actually Alberta Bosseau. She was married twice. She had at least six children by her first husband, one of whom was killed in World War Two. As a resident of Foster, Rhode Island, Alberta Bonneau Saucier Dionne passed away on April 21, 1995, at the age of 94. You can see more about my Lewis Hine Project at www.morningsonmaplestreet.com/lewishine.html

Joe, thank you so much for this information about Ms. Bosseau and sending me your cool website. I loved reading the chapters about your search for Addie Card! I'm planning to look for Ms. Winthrop's books at the library, and look forward to reading more at your site.