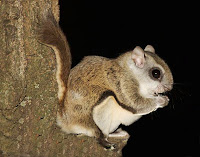 Last night while watching the election coverage on TV, I heard rustling in the chimney above the living room fireplace. Too early for Santa Claus. I was concerned it might be our cat Petey, but I checked and he was slumbering in his bed. The rustling ceased and I again became engrossed in the doings on TV.

Later on, more rustling, and there was Petey, sniffing around the fireplace grille. Then suddenly a small brown/gray form shot from the fireplace, followed closely by Petey in hot pursuit. At first I thought it was a rat, but he had a bushy gray tail.

The poor little guy was finally cornered in the kitchen -- it was a flying squirrel! We managed to sequester Petey in the bathroom and urge the flying squirrel out through the garage.

Not long afterward, Barack Obama gave his acceptance speech. A very dramatic night, all in all!

I had just been reading about animal guides in "Ask Your Guides" by Sonia Choquette. I tried looking up the symbolism of flying squirrels online, but all the information I found was about "regular" squirrels. So who knows if this was a deeply significant event ... or just a cold squirrel investigating a warm chimney?
Posted by Catherine Carter at 3:33 AM

Sounds like someone up there was watching over that cute little flying squirrel. Don't know what to make of the possibly symbolism, but I do know it was a dramatic night!

Hi, Martha! The flying squirrel's visit was definitely an unexpected event, happening as it did at the same time as a much-longed-for event.