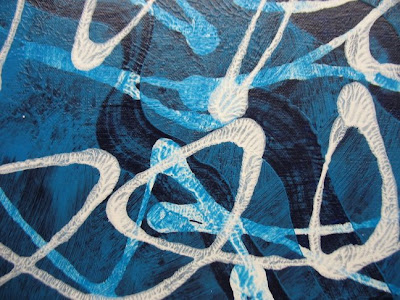 Unforeseen circumstances can sometimes force us to break an old routine or re-examine our habits. Taking a new look can lead to better ways of doing things … or saving money.

I first discovered Golden’s fluid acrylic paints in 2006, and they changed the way I make art forever. I love drawing lines, and previously I had been making them with layered stencils and spray-paint. But when I moved my studio from a warehouse to my basement in 2005, it soon became apparent that the spray-paint smell couldn’t be sufficiently removed from the house enough to live with on a daily basis.

I began exploring other forms of line-making, but none felt right. I tried wide markers, but they didn’t move evenly across canvas (even with initial coats of gel medium). I tried oil sticks, but they were used up in five minutes and I couldn’t afford that at $30 a pop.

At last I spoke with a line-loving colleague who used squeeze bottles. I tried them with diluted acrylic paint, but the paint turned into uneven blobs and wouldn’t extrude evenly. Then I tried house paint, which was the right consistency but quickly clogged up the bottle tips.

At last I was flipping through an art supply catalog and noticed that Golden’s fluid acrylic paint was described as having the consistency of “heavy cream.” Perfect! I had had trouble with getting heavy-body acrylic into a smooth consistency, and this seemed the perfect solution.

As soon as I began working with Golden’s fluid acrylics, I fell in love with the strong pigments, the gorgeous range of colors, and what indeed turned out to be a flowing, cream-like quality. I quickly turned into a loyal customer, and have been for years … until last week.

It was time to replenish my inventory of fluid acrylics, and I found with horror as I was shopping on line that titanium white was back-ordered until July 25.

JULY 25? Are you kidding me? That was two weeks away (plus delivery time). There was NO WAY I could stop painting for two weeks.

But I HAD to have white. The nature of my process is that I paint white lines over a dark background and then layer them with colors, so that the lines appear to have been made with the actual colors, but they glow in a way that they wouldn’t if they had been laid directly on a dark surface.

As I logged out of my online shopping session, I tried not to panic. I tried to push from my mind the realization that I was dangerously out of paint. (Paint IS a drug, isn’t it?) Over the next few days, it slowly dawned on me …

A 16-ounce jar of Golden’s fluid acrylics costs $20 for the cheapest colors, and up to $30 each for the more exotic colors (which of course are my favorites). Yet gallon jugs of cheap heavy-body acrylics are under $10. Problem was, I had always hated the uneven textures that resulted from diluting regular acrylics into pourable solutions; that’s why I prized Golden’s fluids so highly.

But what if I tried carefully mixing the right consistency and letting it sit overnight, I wondered. Maybe it was possible to get and keep a smooth mixture, now that I knew what I was looking for. So I tried it the other day, stirring up a batch using the cheap white Blick paint I had sitting around, diluting it carefully and letting the mixture sit overnight in a closed container.

The result was a nice smooth line that flowed evenly out of the bottle! In the image shown above, the original lines (now light blue) were made with Golden's, and the second set of (white) lines were made with the cheap stuff. I frankly can't tell the difference.

So while I will still use Golden’s for my favorite colors (especially Nickel Azo Yellow), I’m going to try the cost-cutting measure of mixing my own pourable acrylic from the cheapo brands I already have lying around. I’ll miss just grabbing the Golden’s and GOING, but I won’t miss the ongoing staggering expense every time I run out of paints.

By the way, I discovered that the best plastic “squeeze bottles” aren’t the ones you buy for that purpose. Aquify brand contact lens cleaner has the perfect (most grippable sized) bottles with plastic tips that can easily be pulled out, cleaned and changed.
Posted by Catherine Carter at 4:35 AM

The cost of paint is staggering and I LOVE Golden paints. Like you said, the colours are fabulous and the staining and translucency cannot be beat.

I have also found that L'Oreal hair dye bottles are great for pouring without getting blobs where they aren't wanted.

Azo yellow and Phthalo Blue (green shade) are must haves for me.

Thanks for sharing your experience with your fans - especially novices like me appreciate it.

I'm so glad you found this post helpful, Sherill! I wish I had tried this method earlier, many dollars ago, but at least I've realized it now.

I agree with you: nickel azo yellow and phthalo blue/green shade are crucial. But when it comes to white, brown, yellow ochre, etc. -- the "supporting cast" of colors -- might as well use the cheap stuff.

Thank you for writing.

thankyou for sharing this....I have found that golden paints are great and DaVinci fluids work great but still are alot of money when you are painting all of the time...I will try some cheap Dick Blick paint....Sandi Neiman Lovitz

Your comment inspired me to write a blog entry that's an update to this one, Sandi; thank you for writing.