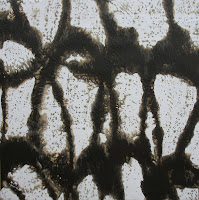 I've never participated in an open studio situation before. Either I had a gallery to represent my work, or I only had large pieces that likely wouldn't be purchased for home settings, or I was painting at home and didn't have an affiliation with a group of artists working in the same building.

But since I am now a "free agent," with the sad closing of my former Boston gallery, and with the economy being what it is, I figured, why not give it a try? So this year I decided to join the arts community in New Bedford, MA, for their open studio event in October. This is a group with which I have a natural connection, since that's where I attended graduate school, and I lived and worked there for 8 years (1995 to 2003), and I write for the city newspaper.

Never having done this before, I spent time over the summer preparing some small canvases to sell at reasonable prices (such as the one above), figuring this is what visitors will likely be able to afford and fit into their homes. It's been fun making these small works, but I've been pretty casual about it up until now, as working specifically "to sell" isn't my usual mode of creation.

Then last week, I received my copies of the programs and postcards for the event, and it all became REAL! I realized that in some ways this is like a show, with guests viewing my work in a public space. And now I've become obsessed!

Since Saturday, I've been making canvas after canvas. I've made greeting cards. I've been grabbing unsuccessful or unfinished old works off the shelf and revamping them. Almost anything in the studio is fair game for a price tag.

All of this reminds me of a hilarious Erma Bombeck book I read and reread in high school. In the book, Erma talks about she was "above" holding a yard sale, scoffing at her neighbors for being so undignified as to display their discards on their front lawns. But then she heard about how much money they were making, and all those high-brow airs went out the window.

She priced and set out a bunch of items she no longer wanted on her driveway one Saturday morning, and soon had an enthusiastic crowd of customers buying up whatever she put out there.

All was going well until she saw the buyers leaving once all the items were sold, and she realized she COULDN'T LET THEM LEAVE! So she started grabbing every object in her house, even things she wanted and needed, and slapping price-tags on them. She even priced a rock in her front yard, which someone bought as a doorstop. The final scene of this exaggerated (but I'm sure based at least somewhat on fact) story shows Erma standing at the doorway of her now completely empty house after the final customer has carted away her last scrap of furniture, with a satisfied smile on her face.

Hopefully I haven't gotten THIS out of hand, but I can't seem to stop from looking severely at every canvas in my studio and considering putting it up for sale!

Here's all the info on the 2009 New Bedford Open Studios, set for Saturday, October 3 from 10 to 5, and Sunday, October 4 from 11 to 5. I will be in the mill building at 21 Cove Street (probably, like Erma, applying price-tags to my shoes, the cup holder in my car, etc.).
Posted by Catherine Carter at 5:38 AM

Ha ha ha...my problem is trying to determine what those price tags should be.

I know what you're talking about Catherine - my first and only experience showing has been as part of an Art Crawl. Somehow one feels obligated to cater to the masses..(and hopefully there will be masses!)

Coincidentally, I'm reading Karen Kingston's book 'Clear Your Clutter with FENG SHUI' which is inspiring me to do another round of purging. I am contemplating being willing to err on the side of getting rid of too much rather than too little. Kind of scary, but also has the thrill of danger to it. We'll see if I'm brave enough..

Think of it as making room (and funds) for more art! Good luck with the show!

Cheryl, that's the big question! You're afraid of charging too much and not selling at all, but also afraid of not charging enough and seeming unprofessional. And it's one of those things no one can help you with; it's such a personal choice. Sigh.

Amy, I will admit up front that I am a serious "chuck it, don't think about it" person. But I usually find that if you honestly feel you don't want a thing, once you do get rid of it, something like it that's more appropriate will come along in its place. My Grandma was the same way; her motto was, "Fire one, fire two."

Martha, that's a good point ... what's the use of having paintings just sit in storage. Not that you want to "give it away," but you do want to get it out into the world so others can enjoy it and so you can get on to new ideas and directions.

Thank you all for writing.