I had a strange day in the studio the other day. I had some nice things going on with three paintings in progress, but somehow I pushed them ALL too far to the point of no return. I got some good ideas about what I'd like to do in the future, but I was disappointed that there was no alternative but to get rid of the current ones.

When I entered the studio yesterday, things had been left in this unsettled state. There was a lot of cleaning up to do before I had the space and presence of mind to make anything new. I was almost out of paint and really needed to buy some new colors, then take the time to mix them, then stretch some new canvases. But I wasn't in the MOOD to get organized; I just wanted to chuck some paint around!

So that is just what I did: I used the few incompatible colors I had left (a weird beige, dark brown, and some tomato-y red), on the only prepared surfaces I had available (blank sheets of paper). I just flung the paint onto the paper and then pressed the various sheets together in a sort of free-wheeling printmaking process. Here are a few of the many pages that resulted. They aren't going to change art history, but at least I had fun and released some pent-up creative energy. 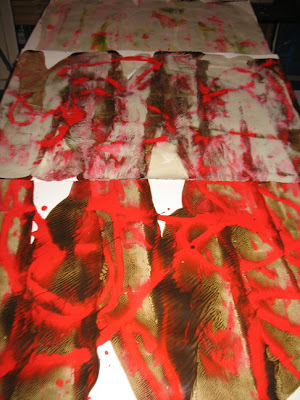 Posted by Catherine Carter at 4:44 AM