Steps of a Painting: Part 2 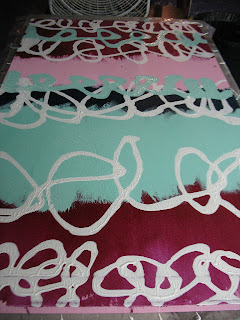 It's been since August 2 that I was working on some new pieces and had the idea of documenting their creation (in this blog entry).

I didn't plan to paint at all today. Even though I'm supposedly on "vacation," I've accomplished a lot of art-career-related projects today, and I was just going to sit and relax for the evening.

BUT I made the mistake of watching an American Masters episode on Robert Motherwell. All it took was a few minutes of watching him work in his studio, moving various shapes around, and talking about the fact that to him, abstraction is an expression of the human experience, not simply "design." The remote control slipped from my hands, and I found myself sprinting toward the studio, my heart beating with inspiration and anticipation.

The only thing I had stretched was the two paintings I had started for my Steps of a Painting series. These were paintings that I had a specific plan for, but I was in the mood to just spew paint rather than follow a pre-laid plan. So I've tried to keep on with what I was doing when I started, but at that time, I was inspired by the summer heat and sherbert colors, and today I'm not feeling that at all. It's cold and raining outside, and has been for 3 days, plus my fall semester starts next week.

That's an important realization about my painting: it's such an expression of who I am and what I'm feeling in the moment, that after 3 weeks have elapsed, there's no way I can expect to be on the same track! After all, I'm not the same person any more.

Anyway, I added some more layers to the two paintings: another layer of color and some rows of loops. But I am not at all convinced about continuing with this direction. I might just scrap these works and try something else! I'll add one more layer and see how I feel when they dry. 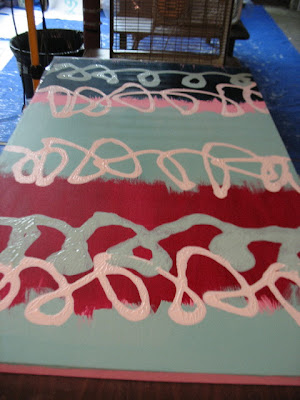 Posted by Catherine Carter at 3:18 PM

Labels: Steps of a Painting

I know just what you mean about trying to get back into a painting in progress after an interruption--and then finding that the palette you started with no longer feels right. I sometimes have five or six pieces in progress, moving in different directions in terms of palette. So when I get to the studio it is all about looking and waiting until one painting pulls me in.
But of course, then there are days where all looks alien. What was I thinking?

You've described the feeling exactly, Tamar! But that's the fun of art, I suppose, you never know what's going to happen when you get to that studio!

Catherine, this has happened to me so many times. I have whole paintings that sit and stare back at me, asking me what I was thinking at the time. Well, you hit on one big factor -- seasonal or climatic or geographic changes. Even situations surrounding our lives as artists influence what ends up on canvas.