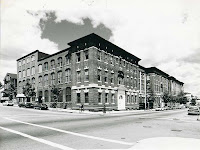 Here's an article I wrote for The New Bedford Standard-Times on the retirement of two painting professors from the University of Massachusetts Dartmouth, which appeared in the paper on June 25.

Bill Elliott, one of the retirees interviewed for the article, was my adviser when I was a graduate student at the university from 1995-97. I have always felt that it was because of him that I got where I am today, as it was his agreeing to work with me that allowed me to attend graduate school. I remember when I first received the letter saying I had been accepted to the school, and I called him up to arrange a meeting. I was nervous: it was a big step to go from full-time secretary in Boston to full-time painting student in New Bedford. But when Bill picked up the phone and I heard that warm, rumbling voice on the other end of the line, I heaved a huge sigh of relief and knew I was doing the right thing. As my adviser, he was unfailingly encouraging and trustworthy, just a pleasure to chat with. It was a nurturing start to my career as a professional painter.