Should I stay or should I go?

One of the hardest things about painting is deciding how to proceed when things aren’t going swimmingly. At that stage, you have to choose between two distinct directions: either you keep working (and risk wasting time and supplies on a dead end) or you chuck it (allowing yourself to move on to something new armed with the knowledge you’ve just gained).

You don’t want to give up too soon, before the image reveals itself. But you also don’t want to “beat a dead horse,” so to speak.

I’ve made both decisions over the past week, with two different paintings, and I feel satisfied that I made the right choice in each case. But the fact that they came right on the heels of one another reminded me of what a dramatic (and quite personal) part of the creative process they represent.

I had a large painting going over the weekend and it just STUNK. Unfortunately I had worked on the most crucial part in my process, laying down the colored stripes, at a time when I was very emotionally upset about something. I was so freaked out about this personal matter that it clouded my decision-making process, and once those colors had been laid down, it was hard to change them completely.

So I tried painting over the painting with a solid color, figuring I’d start again. But it took two coats to cover all of the dark-valued tones on the surface, and by the time those two layers had been applied, the surface was completely smooth. There was no longer any way for me to play with the canvas texture, which is an important part of the “look” I am trying to achieve with this series.

This was an easy decision to make, since the painting had three strikes against it: mottled starting ground, surface too smooth for interesting marks, ugly second try. I grabbed my scissors and felt immense relief as I removed the offending canvas from its stretcher bars.

And you know what? This decision led to another large canvas that turned out WONDERFULLY. I had learned many things from that last flame-out, and was thrilled with the result of this new one.

Then the opposite happened yesterday. I had been working on 56” H x 50” W canvases, and I decided to try some small examples of this series as well. (Always good to keep those compositional muscles in fighting trim.) So I stretched three 20” H x 14” W canvases and jumped in.

The first canvas got to an ugly stage. Muddy colors, no interesting distance relationships, blobs where I had wanted lines. I tried a number of remedies, none of which worked. Then I started to feel sleepy, so I stopped to take a nap. While I was napping, I thought of a whole new direction I might want to go in, so I returned to the studio, planning to grab the scissors and start again on a fresh strip of cloth.

But when I saw the current painting hanging on the wall, there were a few things about it that I really liked and that I knew I couldn’t ever duplicate exactly. So I added a second layer of color to one section and completely recolored another section, thus managing to reshape some of the lines. MUCH BETTER. I’m really glad I continued working on this one. (Shown below.) Whereas the previous one was just going nowhere and would have been nothing but a waste of time to continue pushing.

Another of the wonderful things about being a painter. You are constantly traveling down the pathway of discovery and being faced with that crucial question: should I change directions or is it just a matter of continuing on until I find what I’m looking for? An ongoing adventure, that’s what it feels like to me. 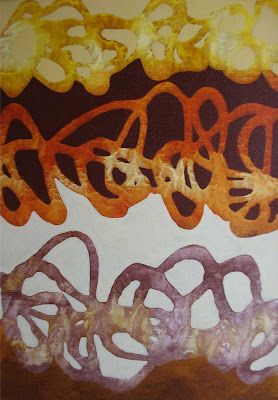 Posted by Catherine Carter at 6:54 AM

First of all Catherine, this is a gorgeous feast for the eyes. And, I want to thank you for sharing your trials and tribulations with your audience.

I so often as a new comer to the art world feel like giving up when I have found that something I have created has 'STUNK'.

Seeing how someone like yourself who has created so many successful pieces of art can have a stinker once-in-a-while and still go on to create something that more than satisfies you, gives me the insentive to keep trucking myself when I feel the 'nah, I have no talent' creeping up on me.

Thanks, Sherrill in Montreal

EVERYONE has those awful paintings, and the more awful ones, the more nice ones. ;-) Thank you for writing, Sherrill.

As a painter myself, Catherine, I come upon this question a lot. Sometimes it takes multiple layers of overpainting to get where I like a piece. Other times it may take years before I come up with a solution. I usually try everything within my powers as an artist before I scrap a painting. But sometimes a dead horse is a dead horse and there is nothing that can be done to save the piece. Thanks for sharing your struggles with the rest of us.

Great writing, Catherine. It's hard to accept how lousy the rough drafts feel and such a relief to get to the good stuff.