A season of stories 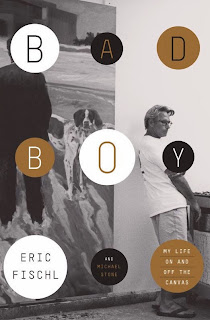 If you know me at all, you know that I am an avid reader. I visit the library at least once a week, and usually come staggering out the door with a swaying stack of books. My favorites to read are autobiographies. I never stop wondering what makes other people tick, and reading about them is the best way to find out without having to leave the comfort of my pillow-propped, blanket-wrapped spot on the living-room couch.

My current selection is "Bad Boy," the autobiography of '80s art star Eric Fischl. I didn't become well-versed in contemporary art until the 1990s, so I wasn't entirely aware of Fishl's work when his career was at its height in the dazzling days when his paintings fetched a cool million dollars per canvas. But I remember reading with great interest a long article in Art In America about his latest series when I was in graduate school around 1996, and being excited by the "hiding in plain sight" nature of the narratives behind his imagery.

Now that I am a painter, I find much to admire in Fischl. In his book, he tells of his humble beginnings as an artist, first signing up for an introductory art class at a community college in Phoenix ("because, after all, who flunks art?") and eventually earning a degree from CalArts on a full merit scholarship. He reveals his attempts to focus on story-telling with his work even though it flew in the face of current art-world preferences for cool, enigmatic abstraction. Devastated by his mother's lifelong battle with alcoholism and finally her suicide, Fischl struggled in his studio for many years, both artistically and personally. He sought an honest, personal content and worked hard to overcome what he admits were his shaky technical skills. Then, with the advent of the '80s and the guiding hand of Mary Boone, his career skyrocketed.

I haven't yet gotten to the parts of the book in which Fischl tells of his excesses of partying, drugging, and other responses to being put on a pedestal. But no matter how much debauchery he describes, I am inspired by his ongoing determination to be truthful in his paintings, to make his art an experience for the viewer. He was constantly pushing himself, even as an undergraduate, to make progress and dig deeper. We can all take inspiration from that.
Posted by Catherine Carter at 4:53 AM