My great-grandfather the artist 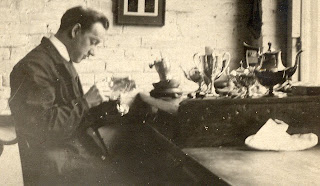 I am often asked if there are other artists in my family. My parents and grandparents are/were very verbal people, and several of them are musically talented. But no one else in my family has an interest in making art, the burning daily desire to create pictures, like I have.

Except, that is, for my maternal great-grandfather, Charles Wallace Marsh, who was an artist. As a little girl, I admired the series of his drawings that my grandmother kept framed on her bedroom wall -- intricate pencil drawings of wasp-waisted ladies wearing huge hats. I delighted in their intricate detail and cross-hatched shading whenever I visited my grandmother’s house.

The drawings of ladies were completed by my great-grandfather during his private time. During the working week, he was employed as an engraver, carving delicate monograms into belt buckles and brooches and cutting intricate designs into silverware and tea services. Since he didn’t have the same freedom to invent details with these monograms that he did with his drawings, he worked creatively within the limitations of the shapes of the letters. He used the sweeping tail of the letter G to create drama, for example, or joined W and M by the comb-like teeth that those letters have in common. When I was young, my grandmother would often take out her jewelry box to show me the collection of pins and rings he had engraved for her.

My knowledge of his life is sketchy, gleaned from stories told by my grandmother, the younger of his two children, and the photograph albums kept by my Aunt Bea, his older daughter. He was born Charles Wallace Marsh in 1872 and he worked for 35 years as an engraver at Daniel Low and Company in Salem, Massachusetts. The wonderful photograph shown above is from 1907 and shows him at his workbench, facing a grouping of fancy silver teapots that await the elegant touch of one of his designs.

He married a woman who, judging from their facial expressions as they gazed at each other in photographs, must have been the love of his life. She looked a lot like the ladies in his drawings. Beatrice was their first child and, when she was about 5 years old, Dorothy, my grandmother, was born. Mrs. Marsh died when my grandmother was still a baby, apparently of typhoid fever after she drank contaminated milk.

My great-aunt and grandmother were cared for by the members of their mother’s large family. They felt loved but always keenly aware of their position as outsiders looking in. At last Mr. Marsh remarried, apparently not for love but to provide a mother for his young daughters. He seems to have put his new wife in charge of the girls while he worked long hours as the family breadwinner. Unfortunately, the second Mrs. Marsh did not prove to be a good stepmother. One family anecdote reveals that she served only stewed tomatoes for the girls’ lunch so often that my grandmother was sent home from elementary school for “malnourishment.” But as so often happens with a distant but affectionate father, his daughters adored “Papa” and relished their time with him.

My mother remembers Mr. Marsh, her grandfather, with the same adoration that my grandmother and great-aunt felt. She recalls him as someone who went out of his way to make her feel special. He built her a swing in the back yard and called her his “little swing girl.” Sadly, he died in 1942, when he was 69 and my mother was 6.

When I look at his drawings and engravings, I feel that I can tell what his motivations were as an artist. He wanted to express life’s gracious, refined qualities, as implied through a woman’s swan-like neck and delicate tendrils of hair. He wanted to capture the simple beauty of shape through the imaginative designs of his monograms. And perhaps, like most people, and artists in particular, he wanted to leave a part of himself on earth after his death. In the way his voice continues to speak through my art, he has certainly achieved that.
Posted by Catherine Carter at 9:44 AM