A difference in perception 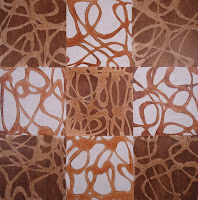 Back in January, I was in a group show called "Opening Lines," in which purposeful use of line was the theme. We artists were scheduled to give a talk to the gallery guests, explaining our individual artistic approaches to line. I knew in advance exactly what I would say: that I am chiefly inspired by the lines I observe in Nature -- branches, vines, roots, ripples on water, etc.

The first artist to speak was a wonderful sculptor whose "lines" were strips of wood that twisted and configured in unexpected ways. As he discussed his interests to the audience, I was shocked to hear these words falling from his lips: "After all, there ARE no lines in Nature," as if it was an absolute fact that every child knows.

Uh-oh! So much for my brilliant premise! I was to speak next, so I identified my ideas honestly, anyway, hoping no one would notice that I had just outright contradicted this fellow. But beyond the talk, I just couldn't understand HOW someone, especially an artist who was clearly as sensitive and observant as this sculptor, could say there are no lines in Nature.

Later, after the talk was over, I realized what was going on. It was a difference of perception and of vocabulary.

One day I was looking at a complex grouping of bare tree branches, and I thought, "OK, those are LINES, don't tell me they aren't LINES!"

And then I realized that a sculptor wouldn't see the branches as lines; s/he would see them as slender rounded three-dimensional forms. But with my particular preferences, background and natural inclinations, I see everything as a series of flat patterns.

I think he might have meant there are no CONTOUR lines in Nature, which of course is true. Honestly, I felt relieved to have that figured out!
Posted by Catherine Carter at 5:35 AM

We can be thankful for all the variations of 'seeing' among artists....and other people for that matter. It would be boring to all be alike.

Absolutely, Cheryl, that's what struck me when I realized what the sculptor meant!