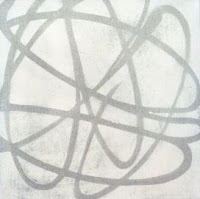 A strange experience today. I took one of my college classes on a field trip to a local art museum, and one of the artists whose work was on exhibit was a professor I had years ago. I saw his name on the wall, and the odd experience I had in his class came back to me in a flood.

I was a freshman in art school when I took this professor’s beginning drawing class. He attended our class a total of 3 times. For every other class meeting, he sent his secretary to the classroom to take attendance and give us students a drawing assignment, which she delivered verbally (no references, no examples, no directions, nothing). We were told that he was sorry, but he was working very hard on his book and was unable to attend our class. Sometimes the reason given for his absence was that he was traveling and out of town. I believe once we were told he wasn’t feeling well that day.

I am shocked when I think back on the memory, that this cretin thought it was acceptable to pull this sort of stunt not once but almost all of the days in the semester. I am also shocked that he was able to get away with it. He was the Chair of the Foundation Department, so who knows what effect his position had on what he was able to conceal from the school administration.

I am further shocked that neither I nor any of my classmates filed a formal complaint against him. I remember feeling indignant that he assigned us final grades when he obviously had no idea who we were (I received a B+), although I still never spoke up about the situation. Ah, youth.

I feel helpless and angry at this memory. I guess the only pro-active thing I can do is to promise myself that I will never forget what an honor it is to be a teacher, and continue to try to do the best possible job I can for my students. I like to hope there is some ultimate justice for those who treat their students, their colleagues, the school that employs them, and the world of art with such contempt.
Posted by Catherine Carter at 5:11 PM

Sadly, this is what happens in many other schools and other types of classes other than art related. Small classes helps but probably isn't the only thing that would prevent this from happening.

Cheryl, I'd like to believe that this was an isolated incident, but I guess that would be naive of me. I wish I had spoken up and encouraged my fellow students to do the same. I forget why I didn't, exactly, I guess it was just general apathy. But my having done so might have spared others from being subjected to this treatment.

This is painful but consoling to read. I similarly question why I did so little on my own behalf in college, other than showing up, to demand instruction. Ultimately you teach yourself while paying a high tuition. You are a much better teacher in part because you learned what you did not want to become.

Wise observations, Laraine. 99% of what I know technically, I taught myself, and the reason is that I had many professors like this who didn't teach me a thing. And it is certainly true that I'm a better teacher because I learned what NOT to do!