Saw the exhibit "Alexander McQueen: Savage Beauty" at the Metropolitan Museum of Art yesterday, and I was awestruck. It was a display of genius: genius of vision and genius of ability.

The wait to get into the show was one hour, even after we'd bought tickets on line (we were told "two hours" at the entry to the museum), but I was with a wonderful companion so it seemed more like a few minutes.

The line snaked through various galleries in the museum, causing us to pass many great paintings and be able to stand in front of them for 10 minutes at a time without having to move aside so someone else could see, like you would in a usual viewing situation. I was particularly fascinated by Jules Bastien-Lepage's "Joan of Arc" (below). Joan is life-sized in this painting, so you can imagine it as a real scene before your eyes. Later, I couldn't help thinking that Joan of Arc would have made a perfect subject of inspiration for Alexander McQueen; her life had all the drama, otherworldliness, transformation, and reference to visual and literal texture (chain mail, silk, fringe, linen, rope, blood, fire) that appear in his work.

We also were lucky enough to see, among a rush of other masterpieces, Richard Serra's magnificent drawing show and a room filled with paintings by Lucien Freud. Quite enough to make your heart beat and your imagination soar!

I did have to laugh, though. When I asked for directions upon arrival at the museum, I almost asked about "Steve McQueen"! (When I confessed my near-mistake to the security guard, she smiled and said everyone does that.)

ETA: My co-traveler has written a post about our experience on her blog, here. 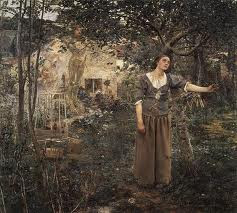 Posted by Catherine Carter at 6:50 AM