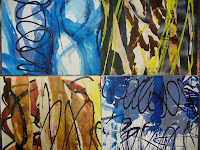 I’ve been having trouble working in a tight series lately, and it was starting to concern me. Consultants, galleries, curators all want to see work in series. It’s a sign of the artist’s consistency and clarity of vision, and it simply looks better on display to group works of art with similar characteristics.

I’d been painting big one day, tiny another day, cool colors one day, neutrals another day, brights another day … working to suit my nature rather than some end product. Which is fine, until you have to present the end product to the outside world, and it looks like some kind of neurotic diary.

Earlier this week, I was asked to show some work in an upcoming holiday sale at the museum school where I teach. I wasn’t sure what to put in, and I started looking through a pile of old works on paper. Four of them jumped out at me, and I decided to cut them down into smaller squares from their original size, which was large rectangles. Then I realized that the four of them, although they had been created months apart with different moods and colors, came together in a nice clear series, representing the four seasons.

The black, white and yellow one looks like spring, with the bright color forcing its way through the darkness. The swirling light blue, which has touches of pastel, says summer to me. The rusts and brown branch-like painting has autumn overtones. And the dark blue and white one looks like a wintry sky over a snow pack.

Voila – the work made itself into a story, without my trying to force it while I was making it! So I’ll put the four pieces into the show and stop worrying about making a series.

Another life lesson, learned in the studio: The minute you stop trying to force things, and ALLOW THEM to happen, they end up turning out better than you could have imagined!
Posted by Catherine Carter at 11:39 PM