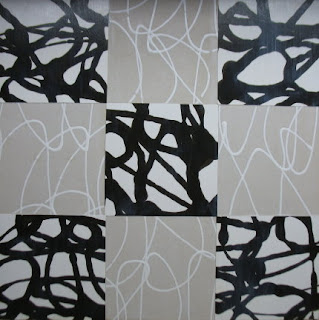 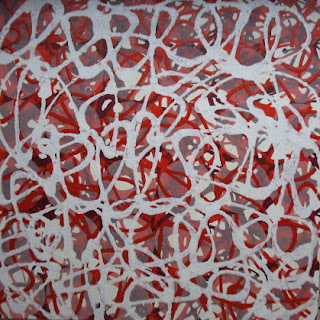 I have a guessing game for you.

Today in the studio I made a painting which I’m very happy with. Whereas yesterday, I made one that I really didn’t like.

I had been intending to post the painting I liked on my blog and just paint over the one I disliked. But then I thought, I bet if I posted both paintings on the blog, some people would probably like the one I didn’t like, maybe even better than the one I did like!

So I’ve posted them both. See which one you like better, and I’ll identify my preference in a later post.

The subjectivity of which paintings are “good” and which are “bad” makes me think of a great story my friend Cherie Clinton told me.

Once Cherie was setting up for an open studio event, and she came across a couple of old small paintings that she had been meaning to throw out. As time was running short, she leaned them in the far corner of her studio, figuring she’d chuck them later. Soon afterward, the event started, and she forgot all about them.

At some point during the hustle and bustle of the day, a woman approached her and said, “I don’t see a price on this painting over here.”

“Which one is that?” Cherie asked, sure she had been careful to price everything.

The woman led Cherie over to the discarded paintings that she had intended to throw out but hadn’t gotten around to. The woman pointed to one of them and said, “This one – I don’t see a price on it. But would you take eight hundred dollars for it?

Soon the happy collector was walking away with her newfound treasure, and Cherie was fondling a handful of unexpected cash. “Imagine,” she said to me, when recounting the experience, “eight hundred dollars for a painting I was going to throw away!”
Posted by Catherine Carter at 12:45 PM

I have the same reaction: one I like a lot, the other I don't. But I don't know if we agree on which is which...

The top (monochrome) one is very strong and dynamic, I love it. The bottom (red) one doesn't really take me anywhere.

If I could boil it down to a few words, the top one has contrast, strength, decisiveness, duality.

The other seems like it's trying to be deep and rich through forced layering (more is more), but it just turns out to have a sort of arbitrary complexity.

Thank you for your feedback, Michael and Marsha. I don't want to tip my hand quite yet on my preference, but I appreciate you both "thickening the plot" by posting yours.