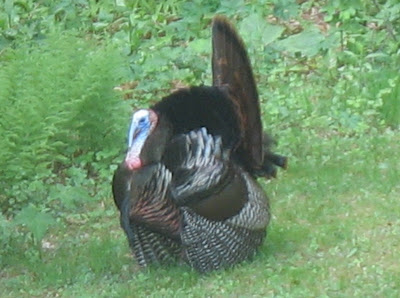 Just because the Robin Family has moved on, doesn't mean we no longer have a wild winged menagerie to admire.

We saw quite an eyefull out in the backyard yesterday. This tremendous Tom Turkey was strutting his stuff for a group of nearby turkey hens! His feathers were puffed way out, and every few seconds he would make a quarter-turn, so that the ladies could admire his impressive physique from all angles. Every once in a while, he would flap his giant wings. Quite a show!

Sort of the turkey equivalent of John Travolta in "Saturday Night Fever" (minus the gold chains).

My husband Kevin made a video of the exhibition, posted on his blog.

Apparently our neighborhood has been a wild turkey hangout for more than a decade, ever since one of the neighbors decided he had tired of his turkey farm and unceremoniously ushered all of his birds out into the street and left them to their own devices.

If Tom is any indication, their descendants will be strutting proudly for generations to come.
Posted by Catherine Carter at 2:00 AM