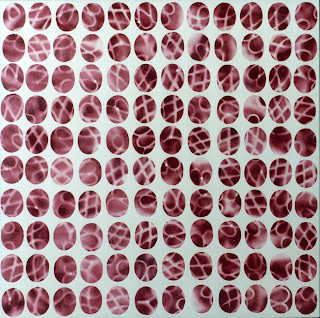 As I wrote in my last post, I've put my art-making on hold, for as long as it takes to: 1. give my brain and body a rest, and/or 2. realize what might be a new direction for my paintings.

I feel like I've done so much with pure line and I don't want to redo former styles or techniques. Yet there's a commercially minded part of me that's afraid of shedding previous directions altogether, since an artist is "supposed" to maintain an identity. This part of me is concerned that I'll appear inconsistent if I try something too different.

But none of this means that my creative valve has been shut off completely. I have a notebook beside my bed that I'm filling with sketches of spontaneous ideas for new painting possibilities. These ideas seem to be inspired by a wide variety of sources, which are not necessarily specifically art sources.

For instance, yesterday I was watching one of those travel shows on TV, an episode on Ireland, in which the host described the many stone walls there. The cameraman shot one of the stone walls almost completely from the side, with only a bit of sky showing over the top of the wall, so that the light from the open field behind streamed through the interesting irregularly shaped spaces between the stones.

I thought, what a great idea for a painting -- lots of odd shapes crammed together across the picture plane (I wouldn't have any space across the top), so that the work became all about the negative spaces. This could be reminiscent of a painting I made some years back (shown at the top of this post), only with different-sized shapes that were more irregularly placed.

Also, yesterday my husband showed me a wonderful blog entry with extreme examples of decalomania, which seemed like it had great possibilities. It sounds basically like a form of monoprint, but these particular examples used TONS of paint in a small space, so that the suction when you pull the paper off creates ridge-like gatherings of the paint. 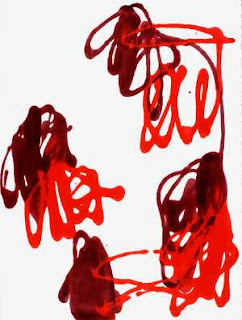 I have worked like this before (see image at left), but when I saw that example I thought, what about doing this with huge BLOBS of paint, not thin lines? The paints would fill the page and be forced to interact in an undirected, unpredictable way, which could be very fun.

So these little ideas keep trickling in. I still don't feel the call to actually grab a bottle of paint and start playing. I'm still so fried from all the effort I poured in to my teaching during the last school year, which only ended on Saturday (not to mention that I just started a new semester yesterday, which includes a five-week class in July and three separate week-long classes in August). So I think I still need a break from the studio.

Part of my non-art time is helping my body to heal itself and figuring out how to take care of it better as I head toward my 50s. This includes vitamin supplements, regular exercise, a healthy diet, plenty of sleep, ongoing reiki treatments, and planned time in the sun and outdoors in nature. I want to build up my immune system, to make sure I never get as sick again as I did last winter (8 straight weeks of the flu).

My mother said to me recently, "Remember that your two greatest assets are your health and your art. Choices you make to expend time and energy need to honor those two assets first and foremost." I believe these are very wise words, and I'm trying to take her advice.
Posted by Catherine Carter at 4:14 AM

She sure is, Laraine. I lucked out when Moms were being assigned (Dads too). So many parents discourage their children from being artists and/or taking on such an unreliable, unpractical career. Mine were always totally encouraging!