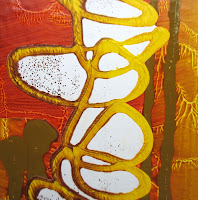 As I wrote in an earlier blog post, "Painting within my means," 2013 is my year to pay off a lingering charge-card debt forever, which means I've been adhering to a strict policy of austerity. And for a former art-store shopaholic like me, that means no new art supplies until the bill is paid off (and from then on, careful consideration before a single penny is spent). I had planned on dealing with this year's restriction by working only in black and white, and re-using old stretcher bars and pieced-together canvas scraps.

That plan has worked fine for the first six months of the year, but I'm finding I'm almost finished with my latest black and white series. Being a person who only feels alive when I'm creating something new and, on top of that, a Gemini, I was beginning to wonder how to deal with the eventual day when I put the last stroke on my black and whites and then start to get antsy for the next project (not to mention a return to color).

An idea came to me this morning, when I thought of a collage I made in 2010 for the Icons + Altars show, which used to be an annual exhibit at the New Art Center in Newton, MA. That year, the deadline for creating a piece for the show was looming and I didn't have time to whip up anything new, so I recombined strips of several old paintings into this collage (below). I liked the result and the piece sold at the event, so I pocketed the proceeds and mentally filed away the technique for future reference.

When I remembered that experience this morning, I thought of the piles of old paintings and drawings currently languishing in my studio, artworks which weren't bad enough to paint over or throw out, but weren't good enough to exist as finished works on their own. "Hey," I thought, "how about if I recombine them into entirely new pieces?"

So, working intuitively, I put together this collage on a 12" square cradled board I had lying around.

The interesting thing about this process is that these various paintings and drawings were made at completely different times (from approximately 2005 to 2012), and created without the idea of their ever coming together. So to combine them together now joins the various techniques and thought processes I've been working on over the years in new and interesting ways. Below are some possible combinations of old works I might try in upcoming collages. We'll see how this new direction unfolds! 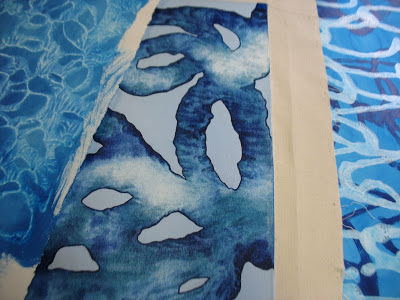 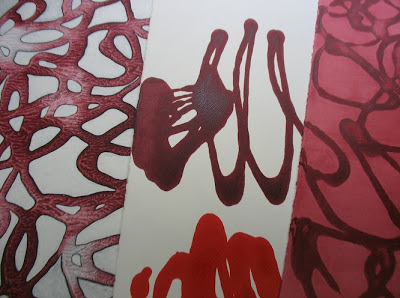 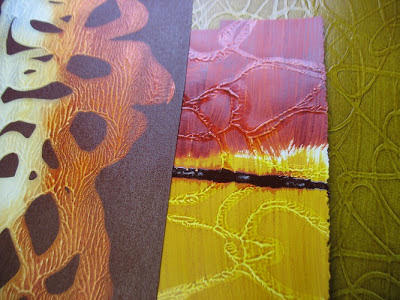 Posted by Catherine Carter at 7:50 AM

Ah Catharine, when you stopped your blog last year I missed all this so much. It is Sept. 29, 2013 now ....found out you are back on line through Martha Marshall's Facebook page and am reading all your "catchup" blog postings today....I do learn a lot this way so for selfish reasons alone...keep on posting. I began painting only seven years ago but I have felt it is something I should always have done. You and my other mentors have pushed me along in the process and you didn't even know it. I now exhibit and sell and it is a wonderful life. Thanks so much for your input. Cheers, Karin Lynn cumming, artist, blogger, Facebook follower, and happy person.

You are so sweet, Karin Lynn - thank you so much for writing! I'm so glad to hear you've found my blog to be of interest and a source of inspiration. Also I think it's wonderful that you've pursued art as a career and are doing so well with it. Rock on! <3