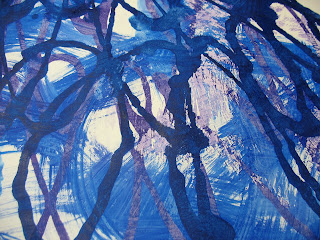 I learn about SO MUCH MORE than art when I paint!

This morning, I was messing around in the studio, and nothing was coming together. I was feeling frustrated. One ugly piece of paper after another. I started getting pouty and petulant. Finally I regressed to an infantile state and threw my brush on the floor.

I decided to keep slogging onward. Then I remembered that painting is like exercising. At first you’re stiff and awkward, especially if a little time has elapsed since the last session (even one or two days can make a big difference). Just like gently warming up one’s circulation and coordination, the “art voice” inside takes time to warm up.

I thought, none of this is going to win me a medal, earn me any money, might never be seen by anyone else but me. So why the heck do I do it? I could be out there earning a Ph.D. I could be climbing Mount Whatever. I could be earning a decent paycheck.

Here’s the answer. Because when two lines are just the right width and they flow together, when two colors touch each other and sing, when two shapes touch each other and bounce … for some weird undefinable reason, THAT’S ENOUGH. It doesn’t matter who made it, although there’s a little ego part inside of me that’s proud that I’m the one who did it. But just to be able to see those exciting things happen on a canvas … that’s reward enough.
Posted by Catherine Carter at 4:41 AM

I agree about the creative process. You have to have faith!

I guess that's one advantage of being a painter versus a musician - a brush is more likely than a guitar to keep working after being thrown on the floor.