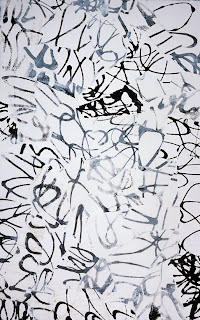 I recently saw a teaching colleague who has been on sabbatical for the past two semesters. I knew she had been looking forward to having a chance to work on her art, so I asked her how things had been going in the studio.

She beamed and replied that it had been wonderful to have so much time to create. She told me this was the first time in many years that she had had enough time to experiment, without the pressure of a limited time frame before she had to rush back to job-related duties, or having to come up with a finished product for a certain event.

I thought this was a significant observation. We artists often spend our time in the studio making work for a particular upcoming show, or a specified piece for a commission. These types of activities are wonderful career (or wallet) boosters, and they can yield some good work. But they don’t tend to involve discovery, which is the fun part.

It’s only when you’re messing around, with no time constraints, that you are free to push the boundaries of what you already know and explore new territory with your materials and tools. Something spills, and you get an idea for a new shape from the pours. Two colors get mixed up when you happen to put two brushes down beside one another, and you get an idea for a new combination. The best paintings I’ve ever made were the result of “mistakes,” when I had been trying to do something else and failed, but realized the unexpected part was far better than what I had originally been aiming for. (Think how many scientific breakthroughs were unintended results that “just happened”!)

It is crucial to allow yourself this kind of creative time, with no deadlines or rules, to try things and fail. That’s the only way to learn and grow, and the result might turn out to be a masterpiece.

The painting above, “Brown Scribbles,” is one of my all-time favorites, and it was the result of just such an experience. I had become so frustrated one day that I couldn’t come up with anything I liked after many tries, that I grabbed an old canvas that wasn’t going anywhere and started tearing up hunks of old works on paper that weren’t going anywhere either, and gluing them on at random. Without my trying – I was barely even looking at the canvas as I did this – a pattern began to emerge, of different line widths blending into one another. Not only did this random working style result in a lovely painting, it revealed an entirely new process to me that in turn resulted in a whole new series.

If I had “succeeded” at making the painting I was originally trying to make, none of this would have happened!

Have you ever had an experience like this?
Posted by Catherine Carter at 12:34 AM