The benefits of hanging in there 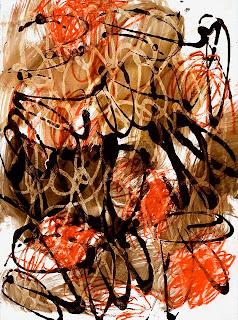 Apparently it's true, the theory that if you hang around long enough, eventually people will notice you.

A friend of mine from work is investigating potential MFA programs, and over the weekend she visited the studio of an artist who has graduated from one of the programs she's considering, to ask about her experiences. My friend happened to mention me during their conversation, and the artist said, "Oh, I know who she is, she's the one who ..." and she traced a swirling shape in the air with her finger.

Now I have never met this particular artist, and when my friend told me this story, frankly I got a little charge from the idea that the woman had seen my work somewhere and that it was distinctive enough for her to have remembered it.

It's been 11 years since I received my master's degree and "officially" began my career as a professional artist (as well as secretary, copy editor, teacher, and the other things I've done to finance my artistic career). In a way it's gratifying to think that maybe those years of effort might be starting to earn me some name recognition in the small world that is the Boston-area art scene.

My ego likes to think so, anyway! And let's face it, as mature and stoic as we try to be about rejection letters, false starts in the studio, being misunderstood by the general public, and the other trials and tribulations that come with being an artist, sometimes our egos can use a little boost.
Posted by Catherine Carter at 2:16 AM